Will Your Spouse Be Financially Secure if You Die First? 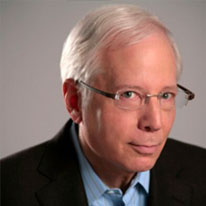 Dan Solin, New York Times bestselling author of The Smartest Retirement Book You’ll Ever Read and columnist in The Huffington Post, shares tips about investing wisely and how to plan your estate so that your spouse is financially safe when you pass away.

No one wants to outlive their money. Creating a financial plan is one of the best ways of making sure that your assets will meet your needs your entire life. Douglas Goldstein, CFP®, director of Profile Investment Services, Ltd., discusses the advantages of planning your budget, lifestyle, and investments.


Watch Will Your Spouse Be Financially Secure if You Die First? on YouTube.

Douglas Goldstein: I'm very excited to have New York Times bestselling author, on The Goldstein on Gelt Show. Dan wrote a very interesting book called The Smartest Retirement Book You'll Ever Read. A lot of people try to be smart about retirement, but everyone seems to have a smart idea. How do you help people figure out which are the smart ideas and which are the scams?

Dan Solin: Most people complicate investing for retirement. The best way people can invest for retirement is by having a broadly diversified portfolio of index funds and capturing global market returns. Usually, people engage in stock picking or market timing or trying to find the next hot mutual fund.

Douglas Goldstein: What can people do to avoid falling into those traps?

Dan Solin: They have to understand that nobody has the ability, as far as I can tell, to predict the future direction of the market. They also cannot identify stocks that are mispriced.

These are pundits who get on and have an agenda of their own. Wise investing entails ignoring the noise and sticking to some basic principles and educating yourself about sound, responsible investing. There are many books, including yours, that tell people how to invest; what to do and what not to do.

Douglas Goldstein: Why do people fail to ignore all the noise?

Dan Solin: Let me focus on the United States. The securities industry is a very powerful marketing machine. Its interests are in conflict with the interests of individual investors. The interest of a broker is to generate commissions through trading and also to sell complicated products. They sell structured products and derivatives that many people like me believe are meant to be sold and not bought.

All this advertising and marketing is very tempting and confusing. In reality, good investing should be about as exciting as watching paint dry. Again, it's really ignoring most of what you see and hear and sticking to a basic plan.

Douglas Goldstein: Sometimes people get so tempted to do something. For example, they'll say, “Listen, before the crash in 2008, everyone was buying houses. You could buy a house with no money down. As soon as my maid said that she owns three properties with no money down and collects the rent, I realized we were about to have a bust and so I decided to sell or I should have sold then.”

Certainly, in retrospect, a lot of good ideas are very obvious and it tempts people to try to beat the market. Is that a reasonable way to approach it or are you just a “no chance of beating the market” kind of guy?

Dan Solin: I don't think it's fair to say there's no chance of beating the market. Let's look at the smartest investors in the world. What's their track record? We find over here that every year about one in three mutual funds, one-third of the mutual funds, and these people have enormous resources, beat the market. But there's no telling which of those funds will continue to beat the market. They don't have what's called persistence.

When you look at the track record of hedge funds, their average returns haven't even kept pace with inflation. Investors would have been far better off investing in an S&P 500 index fund.

If you look at the track record of professional investors, it doesn't give you much confidence that trying to beat the market is an intelligent investment strategy.

Douglas Goldstein: Let's go back to structured products. A lot of times, I also have found that these are quite complicated. I believe that complexity is the enemy of the average investor. Why aren't these a good idea?

The Thing About Structured Products

Dan Solin: First of all, most complex products are structured by the securities industry. They are not even understood by the people who are selling them. They tend to be high commission products and are often illiquid.

If an investment is promising a return over what's called the “risk-free rate of return,” which here would be like short-term Treasury bills guaranteed by the full faith and credit of the U.S. government, then there's risk associated with that. It's just basic economics. If somebody is promising you a high return, you should assume that there's a high risk.

I personally view them as a wealth transfer scheme where money goes from people like you and me who earn it, to brokers who sell these products.

Douglas Goldstein: From our conversation, I'm hearing from you that it's not that you're against people getting advisors to help them, but you are concerned that people are being sold products that aren't appropriate for them. Is that what I'm understanding?

The Role of Financial Advisors

Dan Solin: I think advisors can play a critical role for most investors. The role that they should be playing is assisting investors with their asset allocation. They should also be assisting them with the division of their portfolio, between stocks and bonds. That's really what's going to determine their returns in the future. Helping investors come up with an investment plan because most investors don't have one, and then giving the investors the discipline to stick with that plan in good times and bad are the functions of a competent advisor.

Note that I didn't say that the function of an advisor is to help investors beat the market through stock picking or predicting the direction of the market. If advisors stuck to those basic rules that I just articulated, they are performing a very, very valuable service for their clients.

Douglas Goldstein: Just the other day, someone said to me, “Given a new administration coming in, what's the likelihood that Donald Trump will be impeached, and how would that affect my portfolio?” I said, “I really don't know.” They said, “Well you're in the field so you should have a better idea about this.” I said, “I really have no idea what the likelihood is that he would be impeached.”

I thought it was so funny, and I was very honored that they thought that I was like a Biblical-level prophet. If clients tell their advisors, or expect their advisors to be able know what is going to happen tomorrow, there's such a huge miscommunication going on here.

Protecting Your Spouse Financially When You Die

Dan Solin: I don't know the laws in Israel but here in the U.S., there is a lot that people can do to pass wealth from one generation to another. This involves how you title retirement accounts so that they pass automatically. It also matters whether accounts are held jointly or in your own name. This involves estate planning. Here in the U.S., advisors tend to get paid based on assets under management.

When people buy insurance, that actually reduces the assets under management that the advisor gets paid for. As a result, here in the U.S., many people are under-insured. I can't tell you the number of sad conversations I've had with widows who have to go back to work or sell their homes because their husbands did not have adequate insurance.

If husbands genuinely care about the wellbeing of their beneficiaries, or vice versa, they should take a hard look at what would happen if they died and if they need more insurance.

Douglas Goldstein: Are you talking about life insurance or other insurance products?

Dan Solin: Correct. I'm talking about life insurance. For most people, term insurance is the way to go but there are situations where whole life insurance is appropriate. I find that the whole area is not discussed enough by advisors. I think people should just go through a drill and that's another function that a good advisor will do.

If I was to die today, what will happen to my wife? What are my assets? How will taxes affect my estate? Do I have adequate life insurance? That's a drill that everybody should go through if they genuinely care about the other person.

I heard a radio personality say that you're being irresponsible if you don't do this. That struck a chord with me so I amended my ways and did it.

Douglas Goldstein: Yes, I think that's very true. I think one critical take-away from what you said is we're talking about a specific insurance, which is life insurance. In general, I find that term life insurance is the most appropriate.

We are not talking about all these other insurance products, many of which I've recently been dealing with for a number of clients as well. People will buy all sorts of insurance policies that they don't really need, that they can afford the risk themselves, and they never really collect on because they are so complicated.

The nice thing about a term life policy is that it's black and white. You can collect the money, or your spouse collects the money if you should die, and that's the big test. Those policies that I dealt with personally have always been the very easy ones to deal with.

The way that we've tested it in doing financial plans for clients is exactly what you said. We'll say to a client, “Let's build your financial plan and then all of a sudden stop the income from the husband and see what will happen.” Then we could say, “But what if you got a million-dollar payment at that point, then how would your plan look?” That's one way you can actually test. The clients then feel what their cash flow would be like if the breadwinner passes away.

Dan Solin: That's all excellent, and your clients are lucky to have you. That's a great way to approach it and I wish more advisors did it the way you do it.

Dan Solin: I blog every week for The Huffington Post and also for a trade blog called AdvisorPerspectives.com. My web page is www.danielsolin.com.

Douglas Goldstein: Dan, thanks so much for your time.