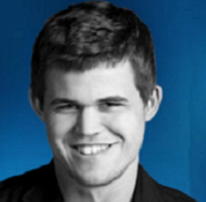 Magnus Carlsen is one of the world’s most famous chess players, becoming a grandmaster at age of 13. In this interview, he shares his thoughts on the question of whether talent is innate or if it is something you have to work at. He also gives advice on how to develop your chess skills and shares what a day in the life of a top chess professional is like.

Grandmaster Magnus Carlsen shares his thoughts on strategy and tactics. Is chess skill innate, or is it learned? Find out how to develop your skills as a chess player and how to make good decisions.

Douglas Goldstein: There is a huge debate about whether people are naturally good at something, they have good genes, or they just work really hard. Where are you in this debate?

Magnus Carlsen: I think it’s always got to be both. I think that working hard is important; there’s also a talent for being able to work hard, definitely. I probably don’t particularly have that talent, but I do have the talent for spending a lot of time really concentrating on something that inspires and interests me. I just don’t call it work.

I think that when you’re used to doing well at something, if at some point you’re not doing that well, things don’t come as naturally to you as they used to, it becomes a bit harder to keep your motivation. Fortunately, I’m nowhere near that point yet.

A Day in the Life of Magnus Carlsen

Douglas Goldstein: You seem to live a normal professional life, though you’re very busy. Can you tell us a little about what your professional day looks like?

Magnus Carlsen: For instance, today, I’m at the office of Play Magnus, my app, and I’m talking to you now, and I’ll talk to some other media later, and some other stuff. So that’s what I consider a working day.

Douglas Goldstein: How about as far as training when you’re focusing on your core business?

Magnus Carlsen: It all depends on the day. I spend some time every day going through games that have been played all around the world. I spend a huge part of my day just thinking about chess, regardless of I want to or not. Apart from that, it’s been like it’s always been for me. I do chess whenever I want to, otherwise I’ll do something else.

Douglas Goldstein: Do you change the way your day looks when you’re preparing for a big tournament like the world championship?

Magnus Carlsen: Definitely. When I’m playing in a tournament of that size, it’s chess every day for 6-7 hours, as well as physical training. Then, it’s all devoted to the preparation, but in regular life then it might just be an hour or something I do every day.

How Can People Develop Their Chess Skills?

Magnus Carlsen: I think that if you want to be really good at chess, the motivation has to come from inside. I don’t think you can be really good at something by considering it as a hobby or something you do once or twice a week, because you sign up for that. I think it needs to be something that you really want to do. That’s the way it was for me, growing up with chess. I would sit at home with the chessboard. I would pick up a chess book, not because someone told me to, but because that felt like an actual thing to do. I think that to become good at anything, for instance in sports, it’s not enough to go to the practices that are scheduled. You really have to live the sport or the game every day.

Douglas Goldstein: One of the things you’ve built up which is a great asset is an app called Play Magnus. Can you tell us a little bit about that?

Magnus Carlsen: Play Magnus is so far an IOS iPhone app. The basic idea of the app is that you can play against Magnus’ of different ages, from 5 to 23. The idea came about when we saw that there are a lot of people who enjoy playing chess on their phone or their iPad, and there were no particularly good apps for this. We felt it would be a much appreciated addition actually to be able to play me on the app.

Douglas Goldstein: Chess is all about strategy and tactics and you’re certainly one of the best in the world. What strategy should people follow if they want to excel in their fields?

Magnus Carlsen: Just trusting your intuition in order to make decisions is a very important skill that you learn while playing chess. In very complicated chess positions, and I’m sure in very complicated business situations, there isn’t going to be one clear solution that’s much better than the others. So in a limited amount of time, you have to process all the different information and make a confident decision based on that. Most of all, we have to live with a decision, regardless of what happens.

Douglas Goldstein: What would you say would be the best way for someone to really develop and refine his tactical skills?

Douglas Goldstein: Is there some inspiring quote or something that gets you going every day and gets you excited to go out and take on the world?