The Good Side of High Finance 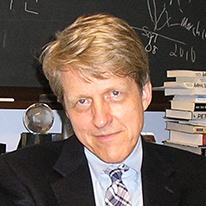 Professor Robert Shiller, winner of the 2013 Nobel Prize in, and author of Finance and the Good Society, talks about how financial institutions and innovations could ultimately be used to improve the quality of society. How can high finance be used to reduce inequality among people?


Watch The Good Side of High Finance on YouTube.

Robert Shiller is an economist who won the Nobel Prize for Economic Sciences in 2013. He has written several bestselling books, including Finance and the Good Society. In this interview, he discusses this book and the role of finance in civilization.

Douglas Goldstein: How did you come up with the title of your book?

Robert Shiller: Partly in reaction to the Occupy Wall Street crisis, because I saw so much hostility being expressed. I started writing the book before Occupy Wall Street, but there is a heightened sense of inequality, and people associate that with finance and it seems like a way of worsening inequality. As our financial arrangements are the backbone of our economy, if they’re done right, it ought to reduce inequality.

Douglas Goldstein: I think the complaint is that they’re not being done right.

Robert Shiller: That’s what my book is about. Finance needs to be made accessible to everyone and made to serve the people better, and that involves innovations. Another theme that you hear about these days is skepticism about financial innovation. Paul Volcker, the former chair of the Fed, said two years ago that he can’t think of any useful financial innovation except the automated teller machine, which is really an engineering invention.

Douglas Goldstein: Certainly, there are a lot of innovations. But I have to say I feel that sometimes they’re just repackaging things that often get a fancy title, like a structured product. The people who sell them don’t understand them. Is that the type of innovation you’re referring to?

Robert Shiller: Structured products have gotten an especially bad name, but they have analogues that have good names. Insurance is good, most people think, and they believe in it. Insurance was first created hundreds of years ago and it took a long time for people to think it was good, but a put option is the same thing as an insurance policy. It’s just packaged a little differently.

Douglas Goldstein: A put option is another thing that people don’t necessarily understand, but if they buy a packaged five-year illiquid banknote, which is linked to the inverse of the LIBOR, people don’t actually know what that is. All the time companies come to me as a financial advisor and ask, “Why don’t you sell this product to your clients?” and it comes with a 400-page prospectus. It seems like it’s not reasonable.

Finance is Part of our Civilization

Robert Shiller: One of the themes of my book is that finance is part of our civilization and it’s a set of rules for people to interact with. People are the problem. Any set of rules is going to be abused by some people. It is human nature. Let’s not be excessively negative about human nature. People have a generous and altruistic side, but they also have a “let’s grab the goods and run” side. With any set of rules, some people could be devious and tricky. That’s why we have all these lawyers writing a 400-page prospectus, to prevent lawsuits. It’s gotten kind of combative, but people are combative. Under the rules that we have, I think that we’ve civilized the combat and we’ve limited the damage from abuse that happened. It used to be that the thing you’d be upset about was some soldiers that came back and shot your mother, or something like that. That’s not the way it is anymore. All they do is cheat your mother a little bit, so we can prove our civilization has improved. The fundamental problem is people, and the financial institutions are good ways of helping improve the situation.

Douglas Goldstein: The innovations that you’re referring to would be the oversight of these financial institutions to make people nicer, or force them to be nicer?

Robert Shiller: Remember that Vladimir Lenin though that he could make people nicer. They called them “Soviet man,” or Homo Sovieticus by propagandizing that by giving people their mindset would change. It didn’t really work. I guess maybe it worked in some dimensions, but it led to a sullen, oppressed population with lots of inertia. It didn’t work. Leave them alone and let do their own thing and they’re going to be aggressive. Humans are status-seeking and they want to gain an advantage. It’s true everywhere; it’s a human universal. We have a set of rules that limits the damage and those rules are partly written by the government, but I think more written by the financial community itself, often in working with the government.

Douglas Goldstein: People often complain that the CEO of a company made $100 million when the shareholders actually lost money. So I always think, why don’t the shareholders get together and vote against him on the board? But it seems that’s not happening. Is there a system that we could expect that would be good for checks and balances, or is this really going to continue the division between the senior members of the board and the shareholders so that they’re really at odds instead of on the same side?

Robert Shiller: I think it’s a little bit fuzzy. There are stories of boards voting for high salaries for their crony CEO. “We’ll give you this, and someday you’ll return the favor to us.” This happens, and then the stockholders are too dispersed to see what’s going on, but other things happen that push salaries up. Supposing a company has billions in revenue but it’s not making a profit, and someone says, “Let’s hire a CEO from another company that’s turned the company around, who knows how to turn a profit.” So you go to this guy and he says, “No, I won’t do it. I’m tired. I’ve done too much of this thing.” So you say, “We’ll offer you $50 million a year.” That’s drop in the bucket if you make billions, and it sounds reasonable. You go to the shareholders, at an annual meeting, and say, “We’re thinking of hiring this guy,” and they’ll say, “Yes, please do it,” because someone heading big enterprise like that can turn it around, and you don’t know that this person will succeed but you want someone who has experience.

Are Very High Salaries Worth it?

Douglas Goldstein: So you’re saying they are actually worth it and people who get paid hundreds of millions of dollars are bringing value somehow?

Robert Shiller: It’s a mixture. Rakesh Khurana is a professor at Harvard Business School and he wrote a book called The Search for the Charismatic CEO. His claim was that people had too much faith in some great man coming in and turning a company around, and that in fact it often works backwards. The great man comes in and he feels he has to do something dramatic, so he takes big risks that a more devoted supporter of the company wouldn’t do. It’s a mixture. We may have gone too far in the executive dimension, but on the other hand, I do believe companies would rationally and logically pay tens and millions of dollars to a CEO.

Douglas Goldstein: Do you think that applies also in the not-for-profit world, where some of the CEOs of major charities also were making multimillion dollar salaries?

Robert Shiller: Non-profit and profit - the distinction between those two is not as clear as you think. In fact, there’s been a trend over recent decades for more and more private-sector-type bonuses to be paid to non-profits. I don’t see why that’s a problem. Non-profits have to get good people. The problem with the government is because voters object to this kind of thing. They don’t pay high salaries. Fortunately, people feel a kind of spirit of national desire to support the nation, and many of them will take very low salaries in government. Even so, I think it’s a problem and it would be better if they were more willing to pay market wages to government leaders. It’s a problem of politics, and there are a lot of poor people who vote. A $10 million salary just sounds crazy to them because they can’t picture it. They can’t imagine it.

Another theme of my book is that really these people should give the money away. That’s what often happens. It doesn’t happen as much as we would like, but if we’re going to talk about improving our society, I think it would be better if there was more of a sense of philanthropy and not family dynasties. We have some leaders, like Bill Gates and Warren Buffet, who recently launched a giving pledge and the pledge was for billionaires to give away half of their wealth to charity. I’ve never met him, but the thing about Warren Buffet is he knows he doesn’t have much time, so what is he going to do with all that money? I think people like to accumulate. This is another theme of my book. We have to have charitable giving laws that encourage people to set up a foundation where they can contribute. I would like to have the kind of thing where you could get the money back if you change your mind, but you want to get people onto the course of setting up a family or foundation, and that would be the status. They would get social status by doing that, and that’s what I’m hopeful we can move somewhat toward.

Imagine yourself as Warren Buffet. You’re 70 some years old, and you don’t have much time. What are you going to do? Just leave it to your children? I believe Warren Buffet, I’m not sure I’ve got the facts here right, has endowed his children with foundations to manage. He hasn’t simply given them billions. He has given them billions to manage as a foundation, and that gives them status. Everyone wants their children to have status, but it’s just silly and ridiculous to build multiple mansions and have expensive parties that are just show-off consumption. We want to move toward a society where people seek status through their charitable giving. In fact, we’re already there. Incidentally, I believe the Jewish community is already there. I’m not Jewish, but I understand that Jews tend to be very charitable and in America, we have enough charitable giving. This is a trend that I think is cultural and it can be developed and it should be developed. That’s one of the themes of my book.

Robert Shiller: I have a website called www.robertshiller.com and also have an online course. You can search on “Shiller” and “Open Yale,” and you can take my exams, but I won’t grade you.