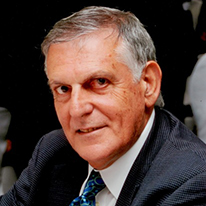 What’s the difference between quasicrystals and regular crystals, and how does this affect your life? Professor Daniel Shechtman, winner of the 2011 Nobel Prize in Chemistry, tells the story of how he defied scientific opinion to discover quasicrystals. Find out which industries use quasicrystals today, and why Israel produces so many successful scientists.

Nobel Prize Winner Dan Shechtman and the Science of Quasicrystals

An example of periodicity is what you see when you look at the square tiles on the floor. Obviously, there’s order and also periodicity. If I stop the line and ask you to continue that, you would know how to do it because there is order and periodicity. Quasi-periodic materials are ordered, but there is no periodicity. If I ask you to continue to build it, you won’t know how to do it unless you obey certain rules, and then there would be no repeated motif there though there is an order. As it turns out, hundreds of materials are ordered and have a quasi-periodic system. So this is a new crystal, and the discovery created a paradigm shift in the science of crystallography, a real evolution of the science of crystallography.

How the Scientific Community Reacted to the Discovery of Quasicrystals

In the beginning, when I was alone, there was an objection among the other scientists where I was. But when I published the first couple of papers with colleagues, it made me feel there was a positive reaction from the scientific community. They joined forces and from there on, we still had to fight, but I was not alone anymore. The other thing is that I was very certain that I was correct from day one, and the objections were irrelevant as far as I was concerned. But the objections continued for quite a few years - first among the International Union of Crystallography, which was the body of the Government of Science of Crystallography, but also later on, when they accepted these findings in 1997. Publication was in 1994, discovery in 1982, publication in 1984, and acceptance by the International Union of Crystallography was in 1987. But there was still some opposition led by Linus Pauling, an eminent scientist, probably the most important chemist in the field, and he continued to object and never agreed.

Douglas Goldstein: How did you gather the strength to continue fighting for what you knew was right?

Dan Shechtman: It was not too difficult. It all depends on character. In the beginning, when I was really alone, nobody came with experimental proofs that I was wrong. They just said, “This animal cannot exist,” and they showed me a book to read. But I said my crystals were out of the book. They were something else. Things became easier and easier, and we were a good young guard of scientists from around the world. By then I wasn’t alone, but then we were a growing group of scientists from around the world, including people from the United States, though not many, but also from France, Germany, China, Japan, and many other countries, and our ranks grew continuously. First, there were tens, and then hundreds and thousands of scientists, and the opposition was shrinking and shrinking until it was gone.

How Do Quasicrystals Affect Our Daily Lives?

Douglas Goldstein: What is it about quasicrystals that might eventually find its way into our day-to-day lives?

Dan Shechtman: If you want to introduce a new material into a product, it means finding applications for a new material. You have to find a special property that is unique to that material and means that the material is very good. Usually, it’s a combination of properties, so there may be chemical properties, physical properties, price and appearance, and these combinations. If you have a winning combination, then you can introduce this material and start using it for making a certain product or making a certain part of a product.

Quasi-periodic materials have certain properties that are interesting, and they have already found their way into industry. For instance, there is a very strong stainless precipitation of steel made by a Swedish company named Sandvik. The steel designation is 1RK91, and that steel is extremely strong, ductile, stainless, precipitation-hardened, and very, very strong. It’s being used in electric shavers. All the parts that are moving there and the parts that touch your skin are made up of this steel, and this steel is used for many other purposes. It is used in operating rooms for surgeries and so on. If you let the steel touch the body outside or inside, it is very good to use, and then there are many other applications.

What’s special about this steel is that it is strengthened by tiny little particles that are quasi-crystalline and are embedded in the steel. This makes the steel very interesting and very useful for many applications. The fact that this material is quasi-periodic material means that it is non-sticky, so you can use it instead of Teflon. Other properties are its heat conductivity, which is very low, and it is a good insulator. If you need to insulate from high temperatures, then you can use coatings of this material. There are properties like this and some have found their way into industry.

Douglas Goldstein: Are any particular companies capitalizing on this concept in a big way that investors should be looking at?

Dan Shechtman: Sandvik is one. It is a huge company and has just one product, so I don’t think it affects their income very much, but it shows that they know how to do business. Other companies are Saint-Gobain in France, which has tried to use quasi-periodic materials in a car engine, and so on. There are many other uses, but not something like this, which is extremely powerful. I think the most profitable product now is Sandvik’s team.

How Does Israel Encourage Young People to Study the Sciences?

Douglas Goldstein: You grew up in Israel, you were educated here, and your whole science background was really developed here. Do you think there’s something special about what you’ve got, and does Israel continue to give that to its students today?

Dan Shechtman: It depends on the school. Some schools teach excellent science, and other schools do not. The problem is that science is not equally taught well in each and every school in Israel, and this is something that they tried to change. I think that science should be taught from a very early age, from kindergarten, preschool through elementary school, through secondary school, so that when students reach the level of academia, of universities, they have a feel for science and they like it. This is a transformation that we have to undergo. As I said, there are some schools that teach excellent physics, chemistry, and mathematics, while other schools definitely don’t. We have to work and change it. Now that I have more access to decision makers, maybe I can make a difference.

Douglas Goldstein: What’s your next project that we should be looking at?

How am I involved in that? For the last 25 years, I have been teaching a class here in the Technion called, “technological entrepreneurship.” By now, I have about 10,000 graduates who took that class and all of them are engineers. That’s quite a large number of the people who were infected with the bug of entrepreneurship and are walking free in our streets, and I hope that they will infect other people with the same bug.

Israel has become a startup nation. Did I have a major part in it? I don’t know. I want to hope that I did, but I cannot measure that. I know that plenty of my graduates help them on startups. That’s one thing locally.

Internationally, this coming November, I will organize an international meeting for ASEAN countries on technological entrepreneurship at the Israel Academy of Sciences. We want to bring them here and hear about their experiences, and tell them about our experience in Israel with opening startups, but also about teaching entrepreneurship. Entrepreneurship is taught in several places in Israel. I may be the first to do it properly, but now there are other places in which they teach entrepreneurship, and we want to teach it to the world. If we have something to teach the world, it’s probably this thing here. Everything else you can learn from the world.

Douglas Goldstein: Can you tell us how can people continue to follow your work?