What Does Chemistry Teach You About Life? 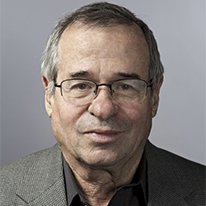 Professor Arieh Warshel, winner of the 2013 Nobel Prize in Chemistry, talks about the role of chemical processes in daily life and how these aid scientific breakthroughs. Find out why there has been a “brain drain” in recent years, as many scientists and researchers look for research funding abroad, and what expat Israeli intellectuals are doing about academic boycotts.


Watch What Does Chemistry Teach You About Life? on YouTube.

Arieh Warshel, a Professor of Chemistry at the University of Southern California, won the 2013 Nobel Prize for chemistry. In this interview, he discusses the uses of chemistry in everyday life and the need for better funding for scientific research.

Douglas Goldstein: Your prize is for what they call the development of multi-scale models for complex chemical systems. Could you describe that?

Arieh Warshel: It’s basically developing computer programs that model how molecules are working. If you can model how something works, you might understand what it is doing.

Douglas Goldstein: How is it that you even could imagine that you could use computers to model such things, when there is simply wasn’t the computing power at the time?

Arieh Warshel: There was enough computer power, at least in the early 70s, to see how the election went. So we never really use too much computer power. We always find a smart way to do it, and it doesn’t happen in one day. We first model small molecules, and then it becomes clearer. With enough simplification, you could model almost everything. It’s a process and I started believing in it quite early, like in 1975.

Douglas Goldstein: The Nobel Prize research that you’ve done actually has been attributed to allowing other scientists to develop programs to, let’s say, unveil chemical processes such as the purification of exhaust fumes or even photosynthesis and green leaves. What’s the connection?

Arieh Warshel: Basically, developing ways to model how bones are being broken in molecules, in a real environment, and not just in the gas phase, could be used for any chemical process. It could also be used for exhaust fumes, but it’s really more for studying photosynthesis.

Douglas Goldstein: How about various industrial or medical applications? Do you see that?

How Chemistry Improves our Everyday Lives

Arieh Warshel: The main thing we’ve done is emphasize chemistry and for those who don’t know chemistry, everything in life is chemistry. It’s basically breaking and making bones in molecules. Everything is molecules, including a lot of the way we think. So what we’ve done is model molecular processes in complex systems. If you have an industrial process, let’s say some molecules, you want to break them fast when you put them with a catalyst, which could be some material with a lot of big holes. So you could model this through the programs that we’ve developed.

Douglas Goldstein: Since you did the research many years ago, can you show us some examples that maybe we would see where this is applied to improve our lives?

Arieh Warshel: One thing is developing drugs. If you have some molecules that you want to bind to a protein in order to prevent this protein from doing something bad in your body, we have programs where you put in the giving molecule and you ask how strongly it goes into the protein and stay bound to it so it would not be able to do the bad things that it is doing.

Israel and the Brain Drain

Douglas Goldstein: Is this issue that Israel is facing of the brain drain a real problem, or is it just the free market and we should accept it as normal?

Douglas Goldstein: What would you recommend to the prime minister to do in order to improve our odds of keeping good people?

Arieh Warshel: There are limited resources, but if you succeed in identifying a research that is looking very poor, but is different to what other people are doing, trying to give enough resources, not unlimited but enough resources, is one way to do it. Sometimes, when people come back after identifying the most promising directions, which is very difficult, by the way, trying to bring them to Israel is another option. But having resources is the most important thing. You don’t have as much as in the United States, but something reasonable could help.

Douglas Goldstein: A lot of professors that I know, including people in my own family, unfortunately spend a lot more time writing grants than actually doing research. If those people were in Israel, wouldn’t they be able to go after the same grant money or it just doesn’t work that way?

Arieh Warshel: First of all, people who are running the National Cancer Institute and the NIH have the same problems. Essentially, Varmus, who runs the National Cancer Institute, said recently in an interview in Science magazine that he like to give to the top people money without writing grants. So the problem exists everywhere, in Europe and in America. It’s become worse and worse, and the answer is that it would be good if it were like in England, where in some extreme places, like the Medical Research Council, they succeed in supporting top people without writing too many grants.

It’s almost like politics. The Max Planck Institute in Germany has directors who do not have to write grants, so it makes it extremely good for them and less good for others. But one of the possible solutions is to give some people the luxury of not being forced to write grants. Clearly, writing the grants is a major drag that doesn’t help science. There are people who tell me that my idea would become more crispy if I wrote the grants. But this is incorrect, and also the more I write the grant, the less chance to get it. It’s a problem without a clear solution, but again if one could identify the top promising direction and there would be no need for writing grants or giving grants for 7 years, this would be great for some.

Douglas Goldstein: What you’re describing would be a situation where the government would actually put money into science. For example, maybe the Chief Scientist would make the decisions, and then those scientists would get to enjoy that money to fund the research without having to go shopping around.

Arieh Warshel: Yes, and it’s very complicated. In Science magazine two weeks ago, there was a very interesting interview with the head of the National Cancer Institute, who addresses this questions and the dilemmas that he has, which is to have less money but still to make less people write grants.

Douglas Goldstein: Let’s talk about a touchy topic that Israeli academics have, which is the issue of academic boycotts. Have you felt any of that, or do you think that it is actually negatively affecting Israel?

Arieh Warshel: I wrote twice in the Daily Trojan against an English professor who tried to introduce a boycott against Israel. I basically say it is anti-Semitic, and the professor claims that it is not. so we have two articles. He claims that he is being just. I made a point that he says Israel bombed a university in Gaza, so I say how dare you tell people in Beer Sheva, where the missile came to Gaza to blame Israel. But it was pathetic as usual, so I really don’t like this boycott. I think it is a problem and it makes me quite angry. I always thought that it would be nice to boycott those who call for the boycott because there is significant power among academics, but not everybody thinks like me.

Arieh Warshel: If you type my family name in English – Warshel - in Google, you will find my group site, and this is the easiest way to follow my work.