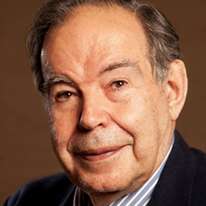 Meet legendary author and expert on lateral thinking Edward de Bono. What is lateral thinking? And what is the logic behind his famous book, The Six Thinking Hats? Find out which hat you’re wearing.

Dr. Edward de Bono is widely regarded as the leading authority on the teaching of thinking. He has authored over 80 books, one of the most of famous of which is called Six Thinking Hats.

Douglas Goldstein: You coined the expression “lateral thinking.” Could you give us a sense of what that means?

Dr. Edward de Bono: Lateral thinking is really based on an understanding of the brain as a patterning system, and patterning systems have a different logic from normal logic. I will give you an example. I was talking in California to 500 ecologists, and they said, “We have a problem with people who built a factory on the river. People downstream suffer.” Using one of the techniques for lateral thinking, which is called “provocation,” I said probably the factory should be downstream itself. That sounds pretty ridiculous, but within a year, 15 countries made new legislation that when you have a factory on the river, your own input must be downstream of your own output, so provocation is one of the tools of lateral thinking.

Douglas Goldstein: Explain a little more how that would work. How could you be both upstream and downstream?

Dr. Edward de Bono: Your own input is downstream of your own output.

Douglas Goldstein: Right after you began to explain his, you found that it was adapted in many different areas as well. In what other areas was this concept adapted?

Dr. Edward de Bono: For instance, with Six Hats, one of the big American finance companies, JP Morgan, used the six hats and said they reduced their meetings to one tenth of what they were. Now, since American managers spend 70% of their time in meetings, reducing meetings to one-tenth means 63% more managers are now an extra cost. Israel could be the first country in the world to use the Six Hats in Parliament. They have been thinking using it in Parliament because certain subjects need exploring, and we have been using the same method of having arguments for 2,400 or 2,500 years. It is a very inefficient way of exploring a subject because the hypothalamus in the brain delivers a chemical to other parts of the brain, sensitizing that part of your brain according to the mood of the moment. In an argument, the mood is negative and distractive. There are parts of the brain that are sensitized or stimulated, but there’s no creativity, no design, no constructive thinking at all. The argument is an extremely inefficient way of moving forward on a subject.

Why Do People Have Arguments?

Douglas Goldstein: What is it that tempts people so much to have an argument?

Douglas Goldstein: One of your famous books is called the Six Thinking Hats, where you basically divide the way people think into six areas and you assign colors to them. Can you explain the logic to that?

Dr. Edward de Bono: Let’s say that with the hypothalamus, the mood sensitizes this part of the brain. In an argument, the only mood we have is negative and aggressive. Now, with the Six Hats, we have the white hat, which is for information: what do we have, what do we need, how do we get it? The red hat is our emotions and feelings. The black hat is the critical: what’s wrong, what’s bad, what’s negative. The yellow hat is looking at the positive, what is the value, and so on. The green hat is creating new ideas or alternatives, and so on, and then finally the blue hat is the summary, the summation or the finding of the problem, and so on.

So we decide with the group, right now we’re going to put on our black hat and everyone looks all negative, and so on and so forth. And then, later on, it might be time for the yellow hat, and you can change the hats’ sequence as you wish. There’s no fixed sequence. So in the yellow hat, each person is doing his best to think in that direction, in that mood. Everyone is trying to find the positive values in that situation. With the black hat, everyone is trying to find defects and negativity, so it’s not just one side against another as an argument, but everyone is using their brain to full complexity according to what the hat is in use.

Douglas Goldstein: Let’s try to bring this down to something maybe a little more practical in terms of finance, because this is a finance show. Let’s try to understand when a family is dealing with its own financial situation, which is fraught with emotions, fear, and practicality. For example, they may not have enough money to do everything they want to do. How can they apply the different directions and the different hat colors?

What Are the Six Thinking Hats?

Dr. Edward de Bono: In the white hat, they explore situation, information, talk to friends and other people, and see what’s possible. Under the green hat, you create the alternative, the possibility, the ideas, the things that might be possible to do. Then you examine all these alternatives with the black hat for dangers or negativity, and so on. Then you have the yellow hat, and then you come back to the blue hat to summarize how far you’ve got. So it’s like looking in different directions, looking north or south, or east or west, and then in any way you want.

Douglas Goldstein: Is there a way that you could encourage people to do that, or teach people to think this way?

Douglas Goldstein: Do you think that this is a system that could be brought into the modern education?

Dr. Edward de Bono: Absolutely, it should be. I’ve always said for a long time that the one thing which is never taught in school is thinking, and thinking should be definitely in the curriculum, even maybe just for a week, right from the beginning upwards. In Australia, they did an experiment where they taught thinking and the grades increased dramatically because the students had been taught thinking. Thinking gives confidence, and confidence creates better performance.

Douglas Goldstein: Today, so much information is shared over the internet, and it makes people feel that they are smart. Is the internet encouraging creative thinking or discouraging?

Dr. Edward de Bono: The huge amount of available information and the ease of getting it is a real problem. The information is valuable, to be sure. But lots and lots of information of no thinking at all isn’t much use. So it’s very difficult to say you’ve had two hours looking at information. Now spend half an hour thinking of something. Maybe the television and computers could automatically shut off and give you 20 minutes of thinking time. It’s a real problem. Just absorbing information is interesting. It is useful, there’s no question about it, but if that is all you do without any thinking then the end result is not good.

Douglas Goldstein: I think that’s a very good lesson for people to take away from our conversation. It can be applied in many areas of life, whether you are teaching your children or handling your personal finances. Dr. de Bono, I would like to thank you very much, and I encourage people to check out your book Six Thinking Hats, and we’ve put a link to it on the show notes of today’s show.