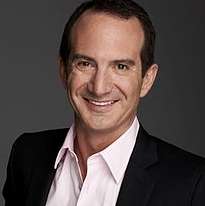 David Bach, author of Smart Women Finish Rich, talks about the “latte factor” and why women need to be in control of their finances. And is it too late to plan for retirement? Find out more on your favorite personal finance show.

David Bach, author of Smart Women Finish Rich, discusses why women need to be in control of their finances. What is the “latte factor,” and is it ever too late to plan for retirement?

Douglas Goldstein: You and I have a similar background, having both started on Wall Street around the same time, at the same firm.

David Bach: I trained at the World Trade Center, and I understand you also trained at the World Trade Center. I still live here in New York, and in fact when I look out my window I can see now what is the Freedom Tower. But I remember going to training, in some ways like yesterday, on the 67th floor of the World Trade Center. I was partners with my father. I remember being a little kid going into my dad’s office, and he used to work at a company. My job was to go down into the ticker and pull the actual stock quotes off the ticker machine, and then bring the stock quotes back to him. Probably, people who are going to listen to this have no idea what we’re talking about. They don’t remember ticker machines. Before there were computers, there was this thing called the “ticker machine.” Things have definitely changed a lot.

Is It Ever Too Late to Plan for Retirement?

Douglas Goldstein: A lot of times, when people are beginning to prepare for their retirement, they only begin to think about it in their 30s, 40s or 50s, and they think that it’s too late. They run the numbers and they say, “In order for me to actually retire successfully, I’ll have to save a huge amount every month.” How can you help people like this out?

Douglas Goldstein: One of things that you often are quoted about is this concept of the latte factor, or the double latte factor. Tell us what that’s all about?

David Bach: So much of what happens to me is the result of teaching investment classes. So I was teaching a class specifically for women, and it was called Smart Women Finish Rich, and I had the same thing. In this case, it was a young woman saying to me, “I can’t afford to save any money.” I asked her where she spends money throughout her day. Her name was Kim, and she said she couldn’t save $5 a day. We started going through her expenses. Every morning she stops at Starbucks, and in fact, she had a latte in her hand as she was telling me she could not save anything. And so I went over to the blackboard, as I was in a classroom, and I started writing it all down. “How much is your latte?” “It’s $3.50” “What do you get to eat with that?” “A muffin.” So that’s $5-$6, and I kept going through her day, and between lunch and jumbo juice, and all the little things, I showed her where she was spending small amounts of money that add up to a fortune. With the latte factor, my original metaphor was that if you cut out your coffee, you save $5 a day, and you could start to build real well. That just became very popular; it’s still very popular. People talk about it all over the world and all it was, was a metaphor. I wasn’t trying to get people to give up their coffee. I’m not picking on Starbucks, and had no success in hurting Starbucks’ business. It was just getting people to think. It could be a bottle of water, it could be cigarettes, it could be eating out. I don’t know what it is. I just know that the world is set up to take our money from us, one latte at a time. People Magazine did an article with me that said, “A latte spurned is a fortune earned.” It’s just a metaphor. So looking at where you spend money on little things, you can start to believe. That’s the key thing. It’s about believing that you can take an ordinary income, no matter what you’re making, that you’re actually making enough to start saving. When people see that trigger, that’s where their behavior changes, and that’s where their life begins to change.

Douglas Goldstein: Women often are in a position where they are in a relationship where they don’t have control of the money. They don’t earn as much of the money, and they don’t really understand the decision making that needs to be made. Sometimes, they don’t even have an equal voice in the partnership. As an advisor, I find this a little bit disheartening, but I do want to find ways of helping them. If you were to give one or two suggestions to women in particular for how they can make sure they’ll have a secure future, what would you suggest?

David Bach: The first book I ever wrote, which is still one of my most popular books, is called Smart Women Finish Rich. I wrote that book for my clients originally because what happened was like you I came in the business with the family. We had a lot of older clients, and my dad had what I recall as a very traditional book of business, where it was typically the man who was meeting with him, and the wife would sometimes come into the meeting, but she was very involved in the financial planning. Then, we started having clients pass away, and always it’s the man who passes away, like nine out of ten clients, because we don’t live as long. The average age of widowhood is 55 years old, and it’s been reported that one in four women are broke within two months of their husband passing away because there was not enough insurance or assets left. Women are going to be retired on an average of 20% longer because they live well into their late 80s now early 90s.

So seeing this pain first hand, I’ve started teaching classes for women. We still teach the same class, Smart Women Finish Rich. We just updated it, and we’re teaching this class all over the United States right now. What I teach women in these classes is really simple. I don’t care what your age is, I don’t care what your income is, I don’t care who you’re married to. You could be married to a local bank president. I don’t care if your husband is an estate planning attorney. You need to know what is going on with the money. Ideally, that means that you’re actually the one that’s meeting with the financial planner and you are equally involved in any financial decisions. If anything, you’re really the family’s CFO, and when I say CFO, I don’t just mean that you pay the bills. I mean, you really know where all the money is being invested, and there are three reasons this is important.

Number one, if you are a widow, you’re going to have to do it eventually, anyway. It’s expected that 95% of all women will manage their money at some point, because they’re going to inherit it, and they’re going to have to even if they’re not managing it now. Second thing is that, statistically, about 40% of people are divorced. So if you’re married, there’s a good chance you’ll have to manage it once you’re divorced. Then, the third thing is, if you’re a successful woman who is working, why would you delegate this? I meet so many successful women who are making more than their husbands, and then they’ve delegated the financial/investment side of their life because they are too busy. If you’re working 40, 50, 60 hours a week, and you can’t spend an hour a month on your financial well-being, you’re making a huge mistake. You will pay the consequences later. So it’s all about financial empowerment, it’s about taking charge, and starting with education. It’s starting with listening to a podcast like this, reading a book like Smart Women Finish Rich, taking classes, and getting knowledgeable.

David Bach: You can go to my website www.finishrich.com, and on my website you can get more information. You can register for our newsletter, which goes to hundreds and thousands of people every single month, and all the details about what we do is on that website, and also on Facebook, www.facebook.com/davidbach.