What is the Role of Innovation in A Nation’s Growth and Future Prosperity? 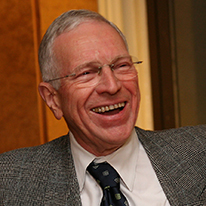 Professor Edmund Phelps, winner of the 2006 Nobel Prize in Economics, and author of Mass Flourishing: How Grassroots Innovation Created Jobs, Challenge and Change, discusses how mass innovation and the creation of new products leads to national prosperity. What do people need to encourage them to think of new ideas? And how do new ideas help spread prosperity?

Edmund Phelps, professor of Political Economy at Columbia University and the director of the Columbia’s Center on Capitalism and Society, won the Nobel Prize for Economic Sciences in 2006. In this interview, he discusses the factors that create innovation and growth.

Douglas Goldstein: Can you tell us about your upcoming book, called Mass Flourishing: How Grassroots Innovation Created Jobs, Challenge and Change?

Edmund Phelps: It is about the birth of mass innovation and why it spread prosperity. It asks how that happened in the early part of the 19th century and what happened in the second half of the 20th century to bring that to an end in several nations. It starts by pointing out that the emergence of grassroots innovation didn’t just produce rapid productivity growth for the first time in human history on a sustained basis. It changed the nature of work. It replaced routine, dull, tedious, lonely jobs with jobs that had problems to solve and were changing all the time, so they were mentally stimulating, intellectually challenging, and so forth.

I argue that science was not driving that, it was people tinkering and thinking about better ways of producing things and new products to produce right down to the grassroots of society. That was especially the case in America. It got an explosion of innovation and a whole lot of human happiness out of that. The first question I take up is what caused this and argue that it was the slow creation of some new human values that came up as early as 1490, values that we usually call individualism and vitalism, thinking for yourself, working for yourself, exercising your creativity, and exploring the unknown.

People have the freedom for those things, but that comes later. I think the ideas came before the freedom came. Of course, also the willingness to bear uncertainty and the gumption to stand apart from your friends or your family or your community are all important. What I argue is the source of the birth of these modern economies in the 1820s and 1830s in the case of America, and later in the case of France and Germany.

Douglas Goldstein: What you’re identifying is something that has changed or weakened in the last half century, but it doesn’t seem to be happening everywhere, and there are certain areas where we continue to see a great expansion and innovation.

Edmund Phelps: I do agree that the sliver of land along the west coast of California is where innovation is still going forward, although even there innovation has slowed down quite a bit. I’m talking about the country as a whole. I would say that Israel is an example where there seems to be a lot of innovating going on. I was speaking to somebody just a few weeks ago who just come back from Israel, and she said to me that it’s just like you said. Everybody is involved in it. Everybody is tinkering or thinking about new products or new methods in Israel, so you’re the new America.

Douglas Goldstein: How have people accepted your theory, because it sounds a little bit radical?

Edmund Phelps: Economists don’t have any problem with the facts of the matter. The facts of the matter are that productivity growth ground almost to a whole around 1972 and it never came back, with the principal exception being the period during the buildout of the internet from around 1996 to around 2004. But after that, it’s right back to a very sleepy time with very slow growth of productivity. In fact, it’s almost dire. In the past year or two, we’ve seen very little growth in productivity.

How Can the Slowdown in Productivity be Reversed?

Douglas Goldstein: Assuming that that’s what’s going or has been going on, what can we do to reverse that trend?

Edmund Phelps: I think what’s been going on is now that we’ve lost the modern values. I think people still have curiosity, still love novelty, and still want to explore, but I think that all sorts of other values have crept in, family values, all sorts of other traditional values have crept in. As a result, the modern values are not getting the space that they used to get to spur innovation. It’s a tough thesis to set out because the evidence is catch and catch can, but we do have some clinical evidence so to speak from household surveys that suggest that family values are on the rise. That means kids ought to stay close to home. They shouldn’t go out tens of thousands of miles into the world, they should stay close to home, and they should support the family.

Douglas Goldstein: That hurts innovation, is that the theory?

Edmund Phelps: When Marconi invented the wireless, he had to get away from the detractors and naysayers and he went to London. As far as I know, Marconi was not an overly sensitive person. He just didn’t feel the cultural freedom to be doing something different.

I’m not saying you have to leave the country in order to innovate. On the contrary, Israel is an example of a country that has been innovating at home, but I would think that the Israelis are a very modern bunch that have been all over the world, very cosmopolitan, full of considerable individualism and vitalism. They have the religious tradition and they have strong families, but you haven’t convinced me that Israel is a very conservative stay-at-home, mind-the-children kind of place.

Douglas Goldstein: Could you tell people, how can they follow you or get your new book?

Edmund Phelps: The book should be out in August and in 2-3 weeks, be out in the United States. I buy my books at Amazon.com, but I also worship bookstores. The bookstores should have it about the same time. I’m looking forward to going around the world talking about it.